Telecommunications company Metfone yesterday launched its new 4G service, which it says will cover areas across the country.

Sorng Nim, the vice-director of the Technical Center of Metfone, said during an event to launch the new service yesterday that in 1980 there was only first generation technology for phones used for voice only, but in 1990 the second generation (2G) started and introduced mobile phone users to a service to send data and SMS messages. 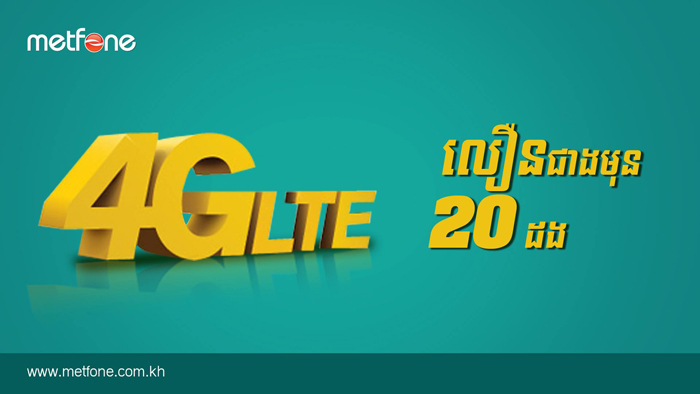 In 2000 the third generation (3G) started and it was the fast growing generation for data on mobile phone. Now 4G is available in the market.

He said 4G is 15 times faster than 3G, with speeds of up to 141 Megabits per second (Mbps). Now 4G is widely used compared with 3G and it can transfer large amounts of data and handle videos being downloaded and uploaded.

“Metfone 4G is special compared to other companies, since Metfone’s network covers all 25 provinces and is expanding to remote locations to bring new technology to all citizens across the country with the fastest speed,” Mr. Sorng Nim said.

Now Metfone 4G LTE has 90 percent coverage of the population in urban areas and 100 percent in the provinces, he said. It enables people to experience the fastest mobile internet connections in every corner of the country, he added.

The 4G LTE SIM cards are available in 122 showrooms and more than 200 authorized agencies and 400 contact points throughout the country. Customers of Metfone who have used the service since early 2016 won’t have to get new SIM cards as all will automatically be enabled with 4G, he said.

Orm Tolarath, Metfone’s Takeo branch director, said it is a suitable time to bring the new, latest technology to the Kingdom. He added that 4G is widely used all over the world in 147 countries.

“Among member states of AEC, we [Cambodia] should have modern technology to push our economy,” Mr. Tolarath added. He said that now there are more than 700 subscribers registered to use the 4G network as its speed is fast and people in remote locations can access 4G LTE.

He added that Metfone expects people will shift to the company as it provides quality and is not just a brand.