The Internet traffic through the Asia-Pacific Gateway (APG), the international Internet cable connecting Vietnam to Asian countries that broke down on February 27, is expected to resume operation at 5:00 am on April 10. 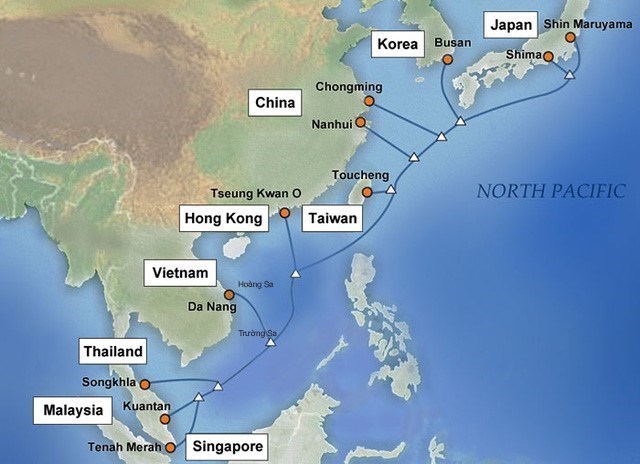 The Asia-Pacific Gateway (APG) international undersea cable broke down at a location about 125 km away from Hong Kong at 6:30 am on February 27. (Photo: Internet)

The international submarine cable will undergo maintenance from 19:00, March 22.

It was down at a location about 125 km away from Hong Kong, disrupting Internet connections from Vietnam to other Asian destinations, according to the State-run Vietnam Posts and Telecommunications (VNPT), one of the country’s largest Internet service providers.

VNPT said in response to the situation, it has re-routed the Internet traffic to other cable systems and been working with foreign partners to ensure the quality of Internet services so customers would not be severely affected due to the problem.

In 2017, the APG experienced two ruptures on June 20 and December 23. It was the second time this year the cable system has been interrupted with the first caused by the expansion of Changi Airport in Singapore.

The 10,400 km-long APG boasts a capacity of 54Tbps, the highest of any network in Asia, connecting eight countries and territories in the Asia-Pacific region – China, Hong Kong, Malaysia, Singapore, Taiwan, Japan, the Republic of Korea, and Vietnam. It was funded by VNPT, Viettel, FPT and CMC Telecom.

The cable system was put into operation at the end of 2016, aiming to reduce Vietnam’s dependence on the Asia-America Gateway (AAG), which broke down several times last year.-VNA