Online video entertainment has disrupted most legacy media companies that refused to acknowledge the market opportunities beyond traditional pay-TV services. This shift has become a global phenomenon. The impact and implications are far-reaching.

Western European over-the-top (OTT) television and video revenues will more than double between 2015 and 2021. However, growth rates within each nation will vary considerably, according to findings from the latest market study by Digital TV Research.

"OTT adoption is already high in Scandinavia, the Netherlands and the UK, but it has been much more muted in other countries -- such as France, Spain and Portugal," said Simon Murray, principal analyst at Digital TV Research. 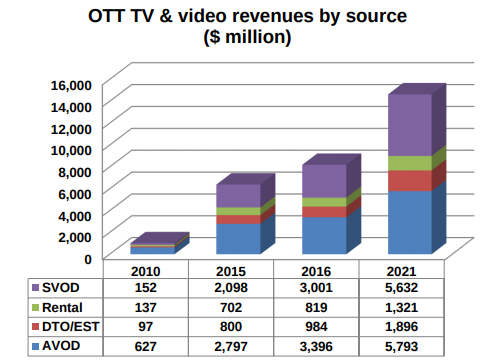 Sweden will have more SVOD subscribers than Spain in 2021, regardless of only having a quarter of the population. Despite this, the number of subscriptions will quadruple in France and Italy between 2015 and 2021 and will grow eight-fold in Spain.