Apple and PayPal have joined teams to take even more human contact out of our day-to-day lives – nice guys.

Starting today (November 10) Siri will be integrated with PayPal meaning customers no longer have to go through the process of talking to other people when transferring money. After all, with the necessity to tweet about the US election, catch-up on an episode of the Walking Dead or conquer the next level of Candy Crush, who has time to interact with other people anyway.

PayPal has slowly been evolving its proposition over the last couple of years, leaning more towards peer-to-peer payment The platform was initially launched as a means to securely pay for goods online, though the volume of peer-to-peer (P2P) transactions across PayPal, Venmo and Xoom increased to $41 billion through 2015. The team now predict there will be more than 17 million P2P transactions in the month of December alone.

This is of course part of a wider trend of consumer habits changing as the world steers more towards the digital economy. The team has also predicted across the Christmas period 20% of millennials will shop on their mobile while at dinner with friends, 22% will shop on the toilet and 34% will shop in bed while their partner sleeps next to them. Check out the full infographic at the bottom of the article.

While PayPal and co. are doing everything possible to remove the pain points of shopping (Your correspondent refuses to go anywhere near Oxford Street during December), a consequence of the digital era and the growth of artificial intelligence seems to be the removal of human interaction.

With the Christmas party period fast approaching maybe the next step for the Siri team could be to introduce a b*llshit / inappropriate comment filter for those who maybe have one too many glasses of Sherry. Not pointing any fingers at anyone in particular… 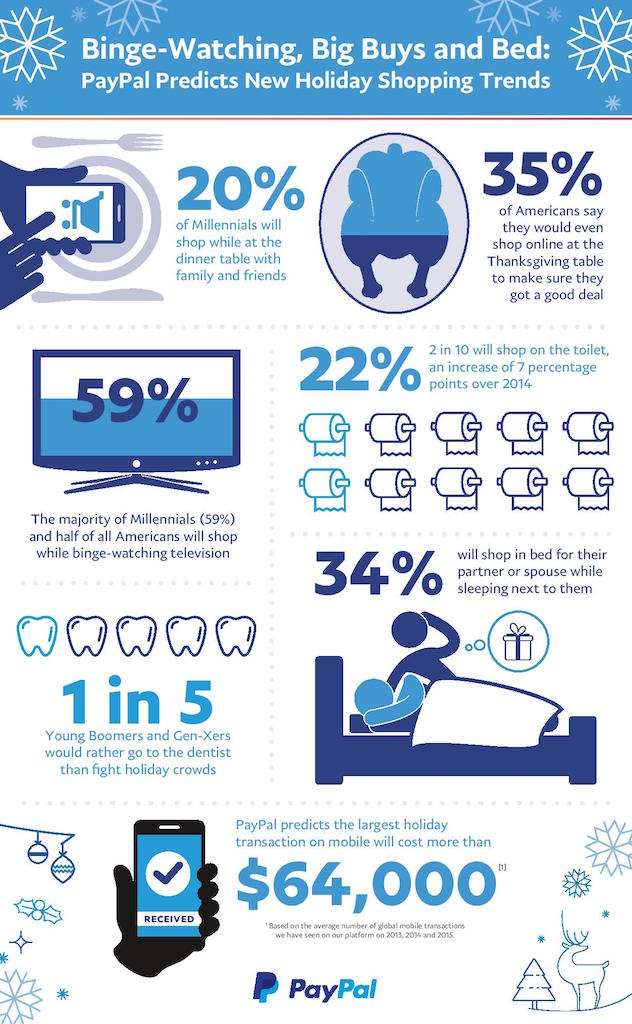