Internet of Things has major potential in Vietnam

Managers of IT enterprises believe that the potential of the Internet of Things (IoT) in Vietnam is huge but it is nonetheless essential to have more supportive policies from the government, the 11th Asia IoT Business Platform 2016 held in Hanoi on November 29 and 30 heard. This was the first time the conference has been held in Vietnam. 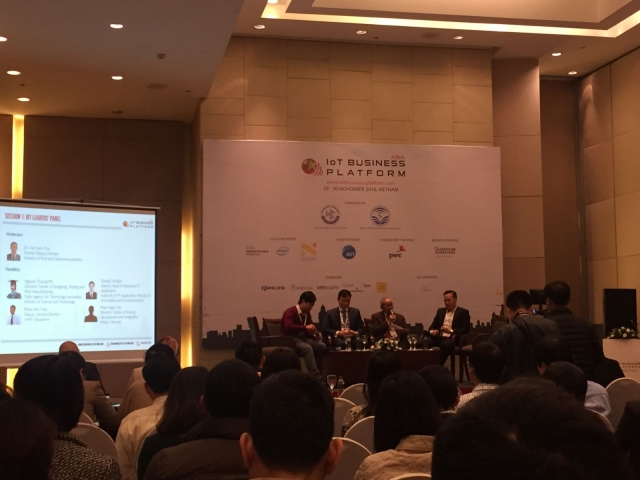 Mr. Zaf Coelho, Project Director of the Asia IoT Business Platform, is optimistic about the growth of IoT in Vietnam, citing gaps in the market as areas that IoT players can fill.

He also insisted that there is no better time to develop IoT solutions in Vietnam to foster socioeconomic development and increase the country’s competitive advantages.

The conference highlighted the value and economic impact of IoT, including improving private and public sector enterprise productivity, harnessing ICT to alleviate problems in dense cities, and powering Smart Cities in Vietnam.

The panel discussions featured key topics relating to the larger IoT landscape, including domestic policies to support telecommunications and IoT infrastructure and the challenges in developing a Smart City in a developing country like Vietnam.

There have been many opportunities for IoT growth in Vietnam recently, according to internal research by Industry Platform, an organizer of the Asia IoT Business Platform. With IoT long been considered an important aspect of daily life, many major projects are being rolled out to leverage IoT technologies to improve quality of life.

The Asia IoT Business Platform conference gathered IoT leaders who shared case studies and insights on the use of IoT technologies across different sectors, such as leveraging data analytics to determine traffic patterns and accelerating digital transformation via cloud technology, agriculture, and banking, finance and commerce.

Vietnam, one of the fastest-growing economies in the world, is rapidly growing its IT sector to realize its goal of becoming an industrialized country by 2020. The government has pledged to invest $111.6 million from the State budget in the ICT sector by 2020, incentivizing local and international firms to invest in the country.

Vietnamese enterprises usually apply IT in manufacturing or management. The application of IoT is still limited but in the future it will be useful in resolving problems in different sectors, according to Mr. Duong Ton Bao, Deputy Head of the Division of IT Application in Enterprises at the Ministry of Information and Communication.