With mobile money services, people can open an account on their phones for payment without bank accounts, making it especially helpful for people living in remote areas, where many do not have bank accounts. 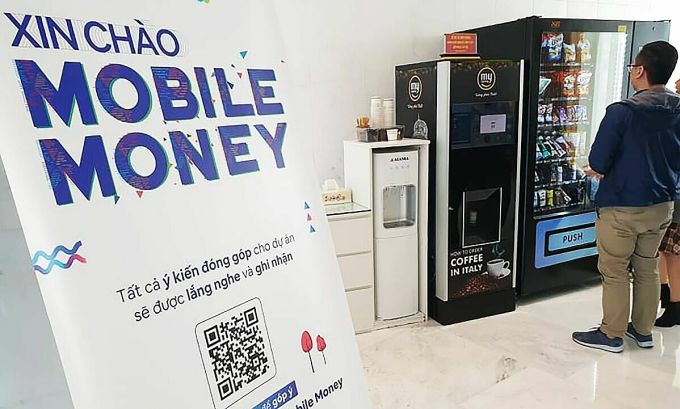 It has payment acceptance infrastructure and human resources in place to provide the service even in remote areas.

Before piloting the mobile money service in Việt Nam Viettel began offering it in six of the 10 overseas markets it operates in, he said.

Phạm Trung Kiên, CEO of Viettel Digital, said mobile money adoption would be the tipping point for non-cash usage in the country since any mobile phone user would be able to make contactless payment.

Viettel expects to have 26 million subscribers to its mobile money service by 2025 and earn monthly revenues of VNĐ6-8 trillion (US$261-348 million) by then.

State-owned telecom group VNPT does not want to be left out, and said it plans to seek approval for trialling its own mobile money service.

Market observers said VNPT with its comprehensive digital financial eco-system has a competitive edge in this. The VNPTPay e-wallet has nearly 50,000 points of sale across the country.

Mobile services giant MobiFone has already been licensed by the State Bank of Việt Nam to provide intermediary payment services, a major requirement to participate in the mobile money market.

It is ready to connect with its current transaction points with necessary infrastructure to implement mobile money services, he said.

MobileFone expects mobile money services to account for 10 per cent of its turnover as it is officially allowed to launch mobile money.

Non-cash payment services have developed strongly in Việt Nam in recent years, especially after the COVID-19 outbreak, with a number of online payment services such as digital banks and e-wallets springing up.

With mobile money services, people can open an account on their phones for payment without bank accounts, making it especially helpful for people living in remote areas, where many do not have bank accounts.

Việt Nam has a population of nearly 100 million with 70 per cent living in rural and remote areas.

The rate of smartphone usage is 85 per cent in cities and 65 per cent in rural areas, which offers plenty of opportunities for players like Viettel, VNPT and MobileFone to offer payment services.

Rebecca Bryant, charge d’affaires at the Australian embassy, told a conference on the sharing economy that with a well-educated and young population and almost 70 per cent of people owning smartphones, Việt Nam’s economy stands to benefit significantly from these technologies.

Last year the central bank issued Resolution No 01/CT-NHNN, which requires financial institutions and government offices to encourage the use of cashless payments for government services, and ensure the payment systems are secure and stable.

“(Banks) must improve and upgrade their technology and telecommunication facilities, develop digital banking services and ensure cybersecurity,” the resolution said.

The resolution is expected to comply with the Government’s Resolution 02, which makes the use of cashless payment a key task in improving the business environment and the country’s competitiveness.

It requires ministries and other government agencies to offer at least 30 per cent of their services online, and allow people and enterprises to make cashless payments.

By last year the SBV, Ministry of Justice and related agencies were required to complete policies on mobile money services to help regulators deal with cross-border transactions.

Thanks to this, the mobile money market is expected to see robust growth.

Some e-wallet firms admitted that the Government’s approval for trialling mobile money would create competition for them.

While similar to e-wallets, mobile money has certain advantages because of current regulations.

One of them is that while e-wallet users must have accounts at banks and put cash into them, mobile money users can directly open an account on their mobile phones without the need for bank accounts.

This makes a telling difference in rural and remote areas where bank accounts are not common.

Analysts said while competition between e-wallets and mobile money is inevitable, it would not be too fierce since they target different customers.

For instance, the transaction limit for a personal e-wallet is VNĐ100 million a month whereas the mobile money pilot project allows a maximum of VNĐ10 million ($430) a month for an identified account.

Analysts said mobile money is meant to help people pay for goods of small value quickly without bank accounts and so the limit is low compared to e-wallets.

According to the SBV, there are only an estimated 4.2 million e-wallet users out of the country’s nearly 100 million people, meaning there are plenty of opportunities for mobile money services.

Economist Huỳnh Trung Minh said e-wallet firms have had to frequently offer promotions to attract users, and mobile money services are expected to put additional pressure on them.

However, mobile money services would significantly improve financial inclusion in the country, he said.

Trương Cẩm Thanh, chairman of ZION Joint Stock Company, the owner of ZaloPay, told Người Lao Động newspaper that some kind of competition between operators of e-wallets and mobile money is unavoidable but they would not cross each other’s paths too much since they have different strategies, market segments and customers.

For example, e-wallet firms like hers focus on urban customers, while mobile money firms, based on what the Government has said so far, prioritise remote areas, she said.

The most important things for mobile payment service providers are a good legal framework and open and fair policies, she added.

Ngô Trung Lĩnh, general director of VietUnion Online Service Joint Stock Company, which owns of e-wallet Payoo, said his company has tied up with several telecom companies to utilise their advantages like technology and customer data.

The close co-operation between telecom networks and intermediary payment companies would help both sides fully tap their mutual strengths, he said.

MobiFone also said competition with e-wallet firms that have been in the market for a while is a market necessity.

However, MobiFone is likely to be not only a competitor but also a partner for e-wallet firms, contributing to the development of the non-cash payment market, he said.

Both sides could benefit, he said.