Vietnam recorded the fastest growth among ASEAN countries in cloud computing spending in the 2010-2016 period, Dr. Vu Minh Khuong, Associate Professor at the Lee Kwan Yew School of Public Policy at the National University of Singapore told the "Fourth Industrial Revolution: Fostering Digital Transformation with Could Computing" conference held on June 22 in Hanoi. 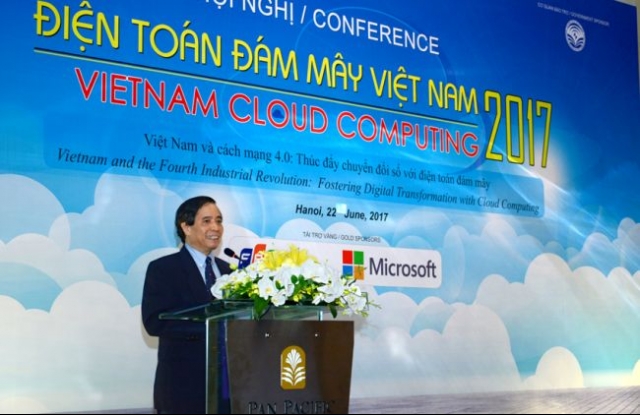 Spending in Vietnam grew at some 64.4 per cent annually in the period, followed by the Philippines with 62.3 per cent and Indonesia 56.5 per cent, Mr. Khuong added.

He also released the latest survey on the application of cloud computing in Vietnam, conducted by the Lee Kwan Yew School of Public Policy in the first four months of 2017, which revealed that 56 per cent of Vietnamese enterprises use cloud computing.

Regarding readiness among Vietnamese enterprises to seize the fourth industrial revolution, on a scale from one to five, the importance of e-commerce in sales by enterprises was 3.9 points, IT being a key part of the business strategy was 3.7 points, and social media such as Facebook being widely used to improve efficiency in marketing and promotion activities was 3.6 points. Increases to IT staff was only 3.1 points.

In State agencies, IT being a key part of strategies to improve management was 3.9 points and the highest result.

It was followed by social media such as Facebook being widely used to access people and other State agencies, and the importance of e-commerce in completing tasks, both of which received 3.6 points.

“Obstacles for enterprises and State agencies in applying cloud computing are the same: the popularity of using software without copyright, the lack of knowledge about the advantages of cloud computing, and concerns about security,” Mr. Khuong said.

“Cloud computing brings many benefits, such as standardizing products and services, reducing investment costs, saving time on developing products, improving services, and having a flexible business model. The government should have suitable policies to direct enterprises and organizations to have strategies in researching and investing cloud computing to improve efficiency in business and manufacturing, which would help Vietnam accelerate the fourth industrial revolution.”