Research recently conducted by Oxford Economics says that the mobile internet sector may contribute US$5.1 billion to Viet Nam from 2015 to 2020, it was revealed at a workshop yesterday. 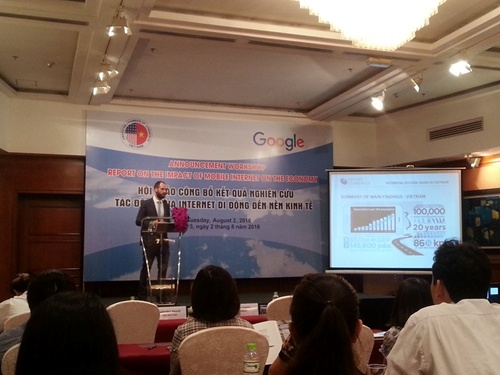 Oliver Salmon, lead economist at Oxford Economics - a British advisory firm - speaks to audience during the workshop on August 2.

This amount was equivalent to 6.2 per cent of the country's gross domestic products (GDP) growth forecast.

According to the research, the sector is also expected to create roughly 145,600 new jobs for the country during the five-year period, or 3.2 per cent of the total employment growth estimate.

The mobile penetration ratio in Viet Nam will almost double to nearly 80 per cent by 2020 from what it was at the end of 2015, which is expected to match the forecast subscription rate for the entire Southeast Asia (SEA) region.

Those figures would be a great improvement for the sector in Viet Nam in comparison to 2010-2015.

During this period, the sector created an output worth $3.7 billion for Viet Nam's total income - equal to 6.4 per cent of the country's total GDP in this period - and helped provide 137,000 new jobs for local people, the research said.

Active mobile subscription rate per every 100 habitants in Viet Nam during the previous five years doubled to nearly 40 per cent at the end of last year from the number in 2013 after growing adequately between 2010 and 2013.

There is a lot of room for development of the mobile internet business in Viet Nam as the country had not paid enough attention to improve the infrastructure and create good legal conditions for the businesses, Oliver Salmon, senior economist at Oxford Economics, a British economic advisory firm, said.

Mobile internet applications have become a transformative force in the economy, which allow people and businesses access to a wide range of information and a customer base, according to Oliver.

Mobile internet also helps people connect with each other and provides lifetime education for people via distant learning.

Viet Nam has its own advantages that can create good conditions to develop the mobile internet business, according to the economist. For example, the country has a youthful population of over 90 million people and has remained above the average level among middle-income economies.

The country is also able to maintain a good annual growth rate of 6.5 per cent since 2000, and has performed consistent economic restructuring to reduce its dependence on agriculture, which the research shows.

Rapid growth of mobile internet industry will help add to the country's income and help the government spend more on social investments, such as raising local people's living conditions and improving public infrastructure.

The research also found that "Viet Nam represents a strong growth opportunity for mobile internet technology" and "the growth of the industry in the country seems to match with the development of the sector among SEA countries".

Rapid growth in subscription rate was found in the research, which illustrated that ASEAN's active mobile accounts took off from nearly 20 per cent for every 100 inhabitants in 2012 to roughly 50 per cent at the end of 2015. The rate is expected to climb above 80 per cent by the end of 2020.

Across ASEAN, mobile internet businesses are expected to generate $58 billion and one million new jobs for the region's GDP from 2015 to 2020 from $47.2 billion and 903,000 jobs during the previous five years.